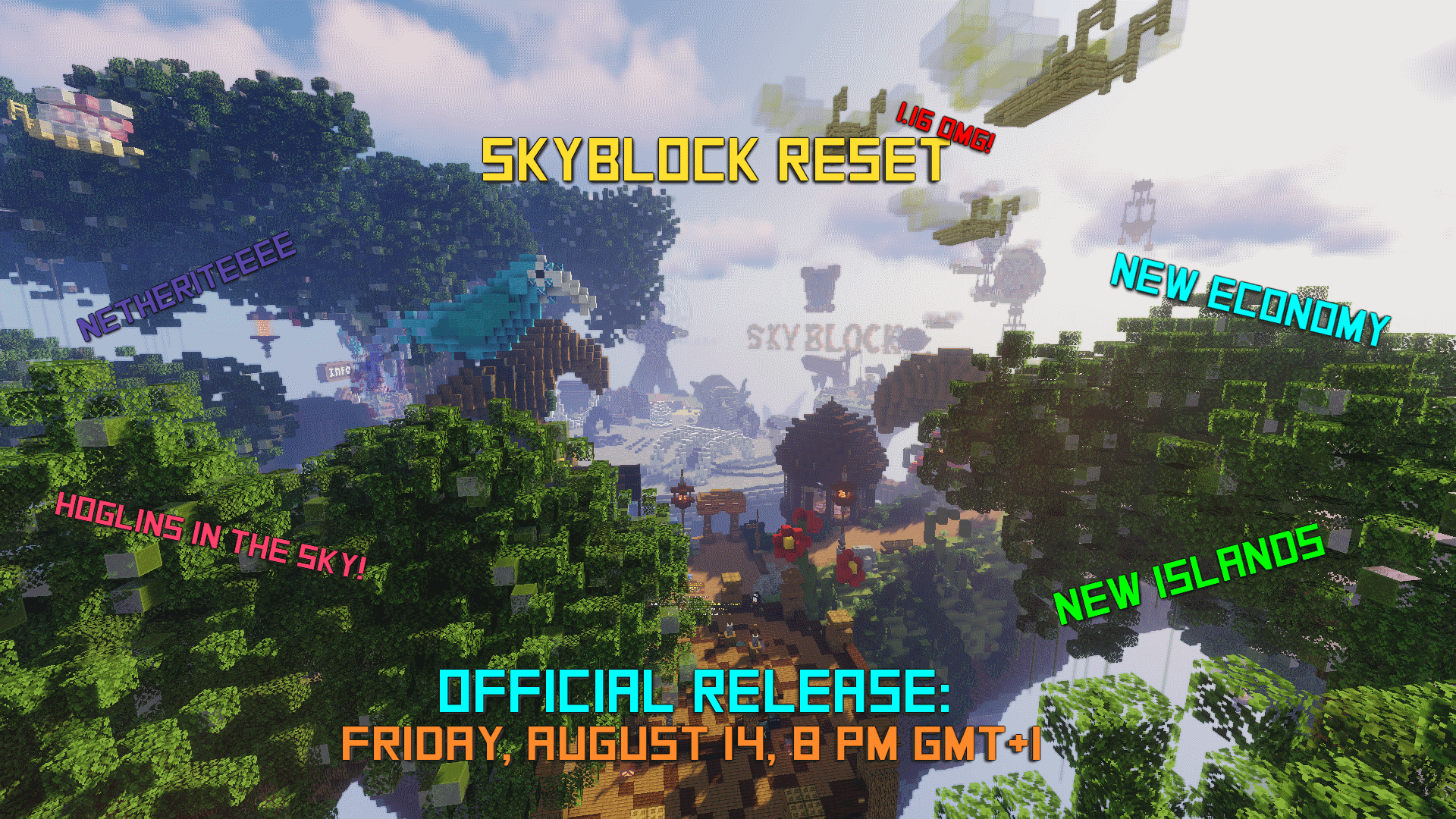 Here are some stuff you can expect in the new reset:​
• The server will be based on 1.16.1
• You can join with 1.12 - 1.16.1 clients
• PvP will still be in 1.8.9 style (aka no hit cooldown)
• New Supreme rank like on Survival
• Islands will have their own nether and end islands. Each island has their own permission system with different ranks and adjustable permissions.
• Toggleable island border (/is border)
• Two chats for islands. One's for the island team (/is teamchat), the other one for anyone who is on the island, including visitors of course (/is chat).
• You can't die from someone else on someone else's island
• New way of obtaining generator upgrades
• 4 new islands and one nostalgia island you can start out with. Each island offers something else (including the starting chest) to increase trading between players.
• Two different islands leaderboards. One will be for the highest island level (also displayed at /warp TopIslands), the other one will be for island likes. Island Likes and dislikes can be given per player and per island. With those two island leaderboards and maybe some other contests (contests at some point, not immediatly), we'll be looking forward to give out rewards for those leaderboards.
• Legacy and Vote Tokens are no longer the same currency (Reworked shops as well)
• Spawners can be stacked up to 5
• Voting is now fixed
• New voting and voteparty rewards
• Events will be held way more often
• Plenty of bugs have been fixed and we'll keep on fixing them, instead of ignoring - New economy - Reworked crates and shop
• Reworked economy to prevent huge cactus farms that'll break the economy
• Gapple cooldown (for now at least)
• New exciting PvP-Arena and PvP-Mine with some cool features which will stay updated and keep on getting changed every now and then
• Blocks available in the PvP-Mine will be upgraded / updated over time. This is to prevent players abusing the PvP-Mine and it's ores straight up from the beginning on.
• Duel arena for a simple 1v1 with given gear.
• Plenty of other stuff, don't forget that we'll also do plenty of updates!
• Lots of player suggestions were added

We are definitely looking forward for plenty of updates (also includes new content) - Feel free to ask questions in game or on discord for more details.


Huge thanks to the SkyBlock head admin, AevoxfromNL, for making the skyblock reset possible!​
The reset will be released on Friday, August 14, at 8 PM GMT+1 time!
*Do note, it might be delayed due to some issues, but I don't expect it.​

Member
Tested and approved by tpg01fromNL

Staff member
Developer
im here to show off my new signature. thanks @WitheredToast

Staff member
Head Admin
I dont think this is real!!!

Member
Well, thanks to:

@SkyblockCommunity for all the suggestions we got via discord, forums or ingame (Feel free to suggest more stuff, we're always looking for new ideas).

@MasterMelon7 for building the spawn.

The current headstaff team, just like a few from those who resigned (@Adro, @Reaper0503, @StLee) for basically help every now and then and all the entertaining moments we had.

SkyBlock is a place i play a lot , all the news about the reset and new things added on SkyBlock are perfect !

Member
Finally is here! Can't wait for it! HYPEEEEE <3
O

Member
what it there is a mod banned me for no reason ....

Member
Nice, finally I can say goodbye to my shitty island xD